If you have seen sheet music before, you will know musical notes are written on a series of lines and spaces. These lines and spaces are called a stave (staff)*. The modern stave has five lines and four spaces. Each represents a note on the white keys of a piano keyboard.

* Throughout this course I will include the US names alongside the European terminology where necessary, as different examining boards follow different protocol.

A clef is a symbol that indicates the pitch and name of notes written on the stave. Clef is French for key. We use three main clefs in contemporary (modern) music, but there are several more.

The three we most often use are:

We also have a neutral clef for percussion; it is not a clef, per se, but a standard convention indicating the musical notes that follow it are to be played by an instrument of no fixed pitch.

Guitarists may be familiar with TAB. Tab, or tablature, appears similar to a regular stave but has an extra line. Instead of reflecting note names, the lines on a TAB stave represent guitar strings. The note heads are replaced by numbers, representing the fret to be pressed (more on TAB in a later lesson).

The Grand Stave is used for keyboard instruments, with a stave for the left hand below and a separate one above for the right hand. Theoretically, the Grand Stave is a single, eleven-lined stave, but that would be far too difficult to read. Instead, we eliminate the middle line and are left with two five-line staves.

The higher stave, or treble stave, is for notes higher in pitch than those on the lower stave. We play these with the right hand. Notes here are prefaced with a treble clef, also known as the G clef. The line which the body of the treble clef curls around is a G.

The lower stave, or bass stave, is for notes lower in pitch than those on the higher stave. We play these with the left hand. Notes on the left hand stave are prefaced with a bass clef, also known as the F clef. The line between the two dots of the clef is an F.

Notes are labelled like the modern English alphabet, but the musical alphabet is very simple as it only has seven letters. It runs from A to G and then starts over, as shown in the keyboard and stave diagrams below.

Eventually, we run out of space to place high and low notes. We can fix this by adding leger (ledger) lines to notes pitched higher and lower than the stave. 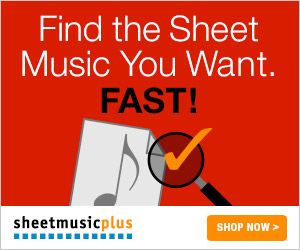